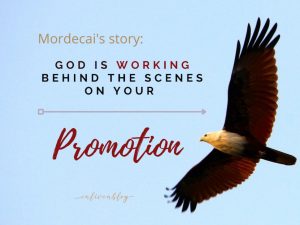 I hear God speaking to many, “Beloved, I am working on your promotion!”
Your Father is active behind the scenes; He is at work in the mystery.

The word “exaltation” has also been translated as “promotion” and means to be raised up (Strong’s H7311).

You’re at the Right Place for a Miracle

In 1 Samuel, Hannah declares, “He raises the poor from the dust and lifts the beggar from the ash heap, to set them among princes. And make them inherit the throne of glory.”
(1 Sam 2:8 NKJV)

In the third chapter of Esther, Mordecai is literally covered in sackcloth and ashes.
He is mourning because his people, the Jews, face a decree of destruction.

Amazingly, only a few chapters later, the king promotes Mordecai to second-in-command in the kingdom.
And so, Mordecai walks out of the king’s presence, wearing the king’s signet ring, in stately royal garments, with a gold crown (Est 8:2,15).

What an extraordinary contrast!

By God’s grace, Hannah’s prophetic announcement is always on God’s agenda. But I believe this parallel story of Mordecai is a sign for someone right now!

The account of Mordecai’s quick advancement, in the face of great opposition, gives us a glimpse into what Divine promotion looks like in action.
So, if you have felt shut out, let down, or persecuted, be encouraged. For Mordecai’s story can be your story!

1. Realize Your Voice is Powerful

One of the themes of the book of Esther is the power of speaking up—especially for justice, and to right wrongs.
We see this in Esther’s bold act of courage, as she petitions the king for her people.

Mordecai speaks up when he discovers a plot intended to harm the king. As a result, scribes write of his actions in the royal records. And God causes it to be brought to the king’s attention. (Est 3:21-23, 6:1-3)

By the time Esther presents Mordecai to the king, he already has a track record of excellence, loyalty, and leadership.

2. Be Aware that Persecution May Precede Promotion

Mordecai is a worshipper of God, and as a Jew, refuses to bow down to Haman, the king’s official. This causes Haman to fume—and he plots to destroy not only Mordecai but to take down all of the Jews with him. (Est 3:1-6)

As with Shadrach, Meshach, and Abednego, Mordecai’s courageous stance draws persecution—but what the enemy means for evil, God is turning to good (Gen 50:20).
Our God can turn persecution into promotion!

Mordecai’s story also tells us that in God’s sight, our character is important. The enemy Haman does all he can, to ruin Mordecai’s reputation and destroy his life. But God overturns those plans.

It’s a reminder that when pressure is coming against you, God’s power is working within you.
And persecution only serves to bring out the best in Mordecai’s life.

4. Embrace the Power of God’s Favor

Favor is one of the great themes of the book of Esther. And the power of God’s favor which marks Esther’s rise to royalty is at work in Mordecai, too.
“He raises the poor from the dust and lifts the beggar from the ash heap, to set them among princes” (1 Sam 2:8a)
Can God do that for you?

This is a promotion that does not come through presumption. Or entitlement.
Jesus teaches his followers to take the low seat, and let God’s favor do the work of promotion (Luke 14:10).

5. See Your Victory with the Eye of Faith

Things look bad.
But Mordecai already sees that the Jews will be victorious, with the eye of faith.

Like Caleb and Joshua before him, he knows that God will protect his people. He even tells Esther that if she does not intervene, God will raise up someone else to do it! (Est 4:14)

But God has chosen Mordecai and Esther to be His key people—inserted by God at the exact moment He needs them.

It is a wonderful story that so clearly illustrates Divine acceleration.
When God has something for you to do, in His sovereignty, He will raise you up to do it. And even if people have rejected you, or passed over you, God’s got you covered!

Once promoted, Mordecai’s first act is to counter the enemy’s decree—the one intended to annihilate God’s people—with a new one. He dictates that new decree aloud, to scribes who write it down.
He communicates in the king’s name, using the king’s seal.
And that decree is sent out, far and wide.

Ultimately, through this Divine intervention, the Jews overcome their enemies and their mourning turns into dancing!
“You turned my wailing into dancing; you removed my sackcloth and clothed me with joy” (Psalm 30:11, NIV)
From ashes to the crown.
From mourning to dancing.
This is a move of God.

A Word for every “Mordecai” and “Esther”

Can you relate to being a Mordecai or Esther? Here are some prophetic thoughts to meditate upon:

“Beloved, I have chosen you, and you are my KEY Person. And I will insert you into situations at the right moment, and I will use you to break open new opportunities. New relationships. And to enter new territory.
And yes, it will be uncomfortable at times, in the turning.
But know that I am with you.
And as miraculous as the opportunity is—you will know that your presence here is not possible except by my grace. But you will know also that I have called and equipped you for this moment.

For Such a Time as This

“I have brought you into the Kingdom for such a time as this.
And just as I raised you up from the “ash heap” of your own low place, you are intimately acquainted with My grace and power.
You will have uncommon faith—a faith that leads the way.

Further, you will know My compassion and love for others who are yet in dark places.
Your reliance upon me will be great.
But many will rejoice in the deliverance that I am bringing throughout the land. And the sound of rejoicing will follow deliverance, like wave after wave.
And you will see it with your own eyes and rejoice.
For I have called you to be a part of it. In the place of your assignment, you are My key.”

Notes
Study the whole of this wonderful story in the book of Esther.
For more of my lessons from Mordecai, see the post “Mordecai: Profile of an Overcomer”

Related Posts
Prophetic Word: Roar ~ It’s Time for Esther’s Decree
Divine Positioning: How to be in the Place God has for You
Go Again: He is God of the Second Time Around (Esther’s Second Banquet)

Leave a Comment
Does this insight about promotion speak to you today? Which one of these points speaks to you most at this time? Scroll down to let me know in the comments box below. Could you benefit from clear and easy to understand, Biblical teaching on the prophetic gift and ministry?