12 Signs Of Spiritual Warfare – To Help You Identify It

Home » 12 Signs Of Spiritual Warfare – To Help You Identify It

Is what you are experiencing spiritual warfare, or ‘just life?’ For many months I blithely walked around my favorite local park, enjoying the gardens, the scenery, and my time out, oblivious to any dangers that might be lurking in the shrubbery.

Then one day I read a newspaper article about a boy who had been bitten by a snake in the same park just a few days before and had been taken to hospital.

We are Kiwis living in Australia. We don’t have snakes in New Zealand. We can walk in the bush in our ‘jandals’ without a care in the world.

On my next visit to the park, I was on high alert. Tense, and on edge, I watched the path and was alerted by every rustle in the bush. There seemed to be an awful lot of rustling! I did not enjoy the walk that day.

Sure enough, I soon settled down and was back to taking pleasure in my walks. However, I took some basic precautions; not veering off the paths and ensuring that I had my mobile phone with me if I was walking alone.

“I have given you authority to trample on snakes and scorpions and to overcome all the power of the enemy; nothing will harm you. However, do not rejoice that the spirits submit to you, but rejoice that your names are written in heaven.”

As my response to snakes in the park, there are two errors that we can fall into with regard to spiritual warfare. One is to ignore it altogether (2 Cor 2:11) and at the other extreme, to make too much of it.

Balance requires us to always step back and discern whether what we are experiencing is spiritual warfare, or just something happening that is physical and emotional, or a combination of both.

12 Signs you may be Experiencing Spiritual Warfare

Here are some signs of a spiritual battle taking place. Being alert to these can help you weigh up whether or not a situation is being affected by spiritual warfare.

1. Changes for the worse (especially sudden or severe) in areas of health, finances, relationships

Important note: When we are sick or when bad things happen to us, it is not always the devil that causes it
·It may be just physical
·Sometimes it is just life
·Sometimes (e.g. financial or relationships) it is others’ or our own wrong choices.

2. The temptation to sin—beyond the normal

Temptation originates with our own weakness and ungodly desires (James 1:13-15) but the enemy can use situations and people around us, to apply extreme or sudden pressure on us in these areas.

Note that this can also be indicative of a curse in operation.

4. Atmosphere – of pressure or oppression

In Rom 14:17, the Apostle Paul tells us that the Kingdom of God consists of righteousness, peace and joy in the Holy Spirit. When we are robbed of these things, we need to pay attention. What happened?

We need to particularly pay attention when the first signs of discouragement strike. Discouragement or confusion should be like an orange flashing light, alerting us to the possibility that we are in a spiritual battle.

According to Rick Joyner, the progressive ‘sting of witchcraft’ is: discouragement, confusion, depression, loss of vision, disorientation, withdrawal and despair leading to defeat. These are the signs we need to pay attention to when on the alert for spiritual warfare in our personal lives and ministry [1]. One example of this in operation is Elijah’s response after he was threatened by Jezebel. (1 Kings 19)

The conviction of the Holy Spirit is specific and brings a conclusion through repentance, but condemnation is cloudy.

7. Intimidation and Fear (I Can’t)

This is especially so when the fear is pressuring you to stop moving in the direction of God’s revealed will for your life, or that of your family, ministry or church.

The enemy thrives in confusion. We think it’s us. Everything gets hazy. Confusion is often an attack on our minds, but it can also be apparent in relationships where communication becomes distorted, perverted, and misrepresented.

9. Anything that brings pressure to bear AGAINST God’s revealed will for your life

10. Pressure (beyond the normal) on important relationships

Our mind (and that of others) becomes a central battleground (2 Cor 10:5), where the enemy tries to sow messages that are contrary to the word God has spoken to us or revealed in the Bible underscoring feelings such as failure, fear, condemnation, hurt, or even attack and accusation of others.

With spiritual warfare, there is usually a distinctive time of onset. If you have an ongoing history in one of the above areas, e.g. fear, relational or sin issues, it is probably not warfare. It may be personal ‘baggage’ that you need to deal with.

And having disarmed the powers and authorities, [Christ] made a public spectacle of them, triumphing over them by the cross. (Col 2:15)

The good news is that Jesus has won the battle for us on the cross. We can apply the authority He has given to us and enter into His victory.

In the next blog post, I will begin exploring some ways to deal with spiritual warfare once you have discerned it taking place in your personal life, church or ministry.

My first real-life encounter with a snake came later, in another park. My husband Malcolm (aka The Hunk) and I were exploring a trail when we came across a poisonous brown snake barring the way to our destination.

My intrepid husband crept closer to the snake doing his best Steve Irwin impression (‘Crikey! Isn’t it a beauty?)

I, on the other hand, dug my heels in and refused to progress any further, even when the snake veered off into the undergrowth. What if it was there again when we returned?

It seems that some things never change! 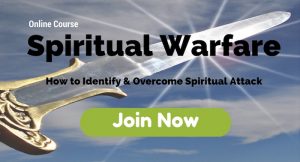 I have just launched my first new online course, ‘Spiritual Warfare 101: How to Identify and Overcome Spiritual Attack’ and I warmly invite you to join me!

And once you’re in, there is no expiry date.

How to Wage Spiritual Warfare: Specific Strategies You Can Use

6 Reasons Why Moving in the Opposite Spirit is Powerful